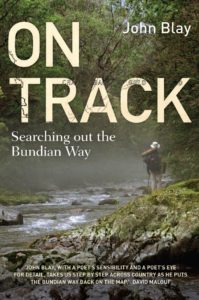 Searching out the Bundian Way

Is it possible to scale that dark mass, the highest part of Australia, and then walk all the way from the summit to the sea as the old people are said to have done?

On Track is the fascinating account of John Blay’s long-distance walking in search of the Aboriginal past and the old ways of travelling between the Kosciuszko high country and Twofold Bay near Eden on the New South Wales far south coast. The 360-kilometre route of the Bundian Way traverses some of the nation’s wildest, most remarkable landscapes from the highest part of the continent to the ocean.

This epic bushwalking story traces the region’s people, natural history, country and the rediscovery of an important shared history pathway. Now heritage-listed – and thanks to the work of Blay, Aboriginal communities and local people – the Bundian Way is set to be one of the great Australian walks.

For a signed copy, please request in the ‘instructions from buyer’.

‘The Bundian Way is a reconciliation … This is a track, a meeting place, that links the freshwater to the saltwater, the beaches to the mountains. People traversed that track for a lot longer than most of us can get our heads around. And it should be a track for all of us to come together now.’
— MICK GOODA, Aboriginal and Torres Strait Islander Social Justice Commissioner

‘On Track is proof that the land still has its mysteries, and that after more than 200 years, the age of explorers is not yet over. John Blay, with a poet’s sensibility and a poet’s eye for detail, takes us step by step across country as he puts the bundian way back on the map.’
— DAVID MALOUF

Some reviews:
His epic journey of rediscovery, chronicled in On Track: Searching Out the Bundian Way (NewSouth, 2015), is much more than a bushwalking narrative; it’s a spiritual odyssey in which Blay uncovers the long lost history associated with this significant track. It also highlights the trials and tribulations of long-distance walking.

However, it’s Blay’s delightfully detailed descriptions of the varying country through which he travels, unmatched by anything else I’ve read about this region, that makes On Track a must-read for any lover of the Australian bush, bushwalker or not.
— Canberra Times

Pedestrian shouldn’t mean dull, it should mean enlivened. Heart and lungs doing their work, blood flowing, spine unfurled, the walker looks about, takes in sounds and smells with a mind at liberty to float from one thought to another, or to find a new way to tackle some persistent enigma that grew thorns while the body remained sedentary.

Bush walkers, early morning walkers in gym clothes, dog walkers, kids walking to school, saunterers, flaneurs, evening promenaders, walkers headed out for coffee, or to buy the newspaper. A walk can be taken alone or in company, shared in near-silence or filled with intense discussion. Walking offers pleasure, but the quality of a walker’s journey depends on the season, the weather, and the skills and knowledge of yourself and your travelling companions. You can’t try and bully or charm your way into an upgrade when you’re walking.

For writer and naturalist John Blay, setting out to rediscover the Bundian Way, an ancient path that links the high country and the coast of southeastern NSW, walking was part of his research. In between walks, he burrowed into documents — journals, parish maps, surveyor’s field books — and he talked to politicians, poets, novelists, librarians, old bushmen, conservationists, National Parks and Wildlife Service staff, scientists, the descendants of settlers and, most importantly, to Aboriginal communities still living in the southeast of the state. The result in On Track is a unique and detailed picture of a region too often overlooked, bypassed as it is by the traffic zipping between Melbourne, Canberra and Sydney on the Hume Highway.

Blay doesn’t avoid the ugliest, most disturbing history of the places he walks. He writes about the massacres of Aborigines carried out by settlers, the sometimes violent conflict between groups of Aboriginal people that was often the result of dispossession, and the more subtle forms of cultural pressure, perhaps well-intentioned — such as the handing out of woollen blankets that were an inadequate replacement, practically and culturally, for the fur cloaks that had kept people warm and dry.

Blay is equally direct about the difficulties experienced by the settlers, and he makes it clear that occupation of the Aboriginal land did not always result in wealth, success and contentment…
For all the compelling, detailed history Blay recounts, it is the experience of walking that is at the heart of On Track. Blay uses the geography of the region to structure his book, with three sections — The Higher Country, The Monaro and The Coast — becoming holdalls for the many trips he made, the years of documentary and oral research. Within this broad structure, he writes associatively, touching on the history of whaling, cattle and sheep farming, but returning always to the walk.

Blay’s descriptions of walking made me want to get out of my chair and put my boots on. He describes how walking affects him physically and emotionally, and the day-to-day necessities of looking for water, making camp, forcing his way through scrub. Slowly, sometimes painfully, sometimes in near-ecstasy, he traces and retraces the trails he has found on old maps, heard about in conversation, or rediscovered by reading the land itself to search out the near-forgotten route.
— The Australian

This impressive book sets out to achieve a regional reconciliation of history by walking the land. The book is about a journey, called the Bundian Way, that meanders over the Alps through the Monaro Tableland, the South East Forests and on to the coast at Twofold Bay.

Author John Blay takes you on a journey with different stories through time and space, and like a laid back Dr Who he took a decade to write the book, and it shows. At points the reader is lost in the labyrinth of narrative and history. I like that. This is not a trip report with GPS references, although the astute will pick up references to good camp sites and the potential of this walking route. This is as it should be, for the path to reconciliation must be walked. It is not something you drive down, it takes time.

On track is a book that takes you to the heart of the Country, its cultural and spiritual heart, with natural science providing counterpoint to John’s poetic reflections on history. There are many historical layers to this travelogue of John’s odyssey. Inevitably in this record of rediscovery, places are revisited, some more than once, as we journey from the Alps to the sea.
— Colong Committee for Wilderness Bulletin