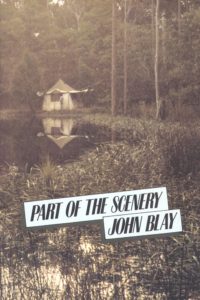 One day in 1979 John Blay pitched a tent beside a dam in a spotted gum forest on the southern coast of NSW. ‘The site overlooks a patch of yellow waterlilies. Further away lilies coloured blue, white and red sparkle on the reflection of thick forest and sky.’

His family were not far away in the house they had been in for almost a decade—but as Blay lived and worked and listened, the forest began to affect his being in ways he could not undo. He began an exploration of the region’s forests, their flora and fauna, that has been ongoing.
This is a deceptively simple, wise book in the tradition of Thoreau’s Walden – yet as utterly Australian as the scenery it celebrates.

Sorry, no copies are currently available.

…Thanks to its over-riding good humour, it has the spontaneity of Richard Brautigan’s rewriting of Thoreau’s Walden. It’s a wonderful book of characters and things that clamber through the forest with details delivered with a confident poetic touch.
— Tom Thompson, National Times

…There are no shallow panegyrics in Part of the Scenery about pre-industrial paradises in nature, nothing facile about the attainment of spiritual oneness. Blay speaks to us of hard work, experiment and emotional desperation. But his quiet expertise about lyrebirds and bushrats in his Bermagui forest never fails to impress and fascinate…
– David Myers, Sydney Morning Herald