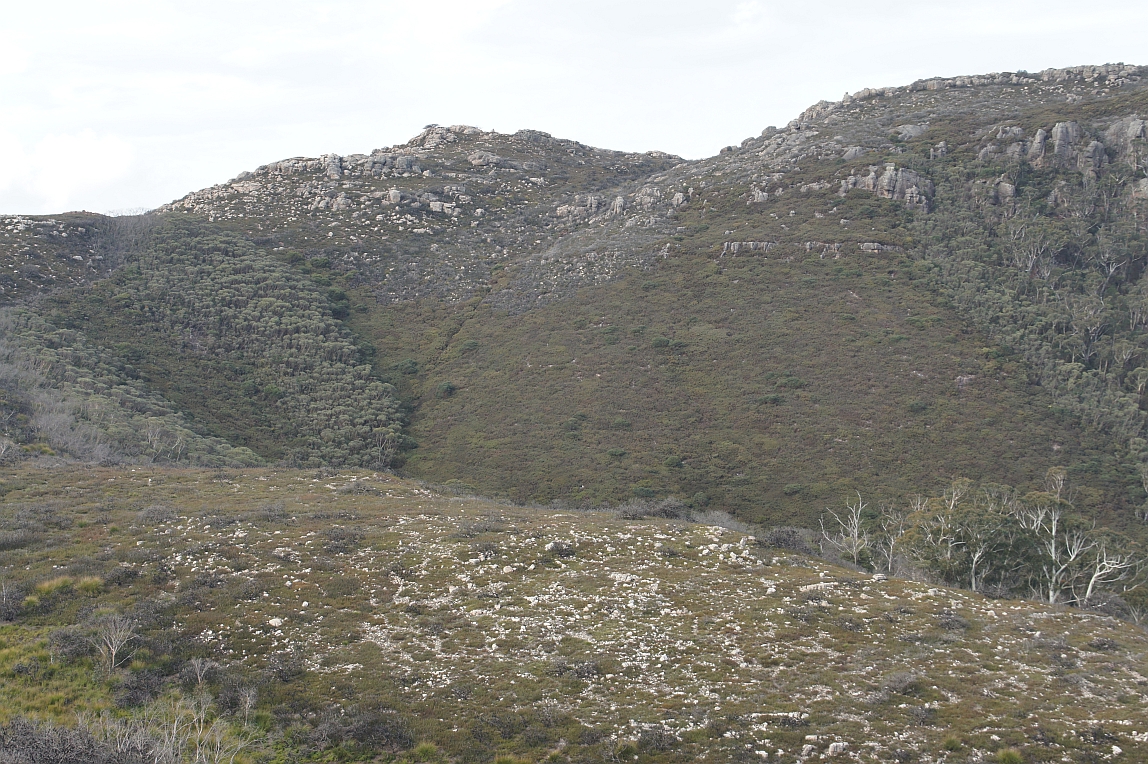 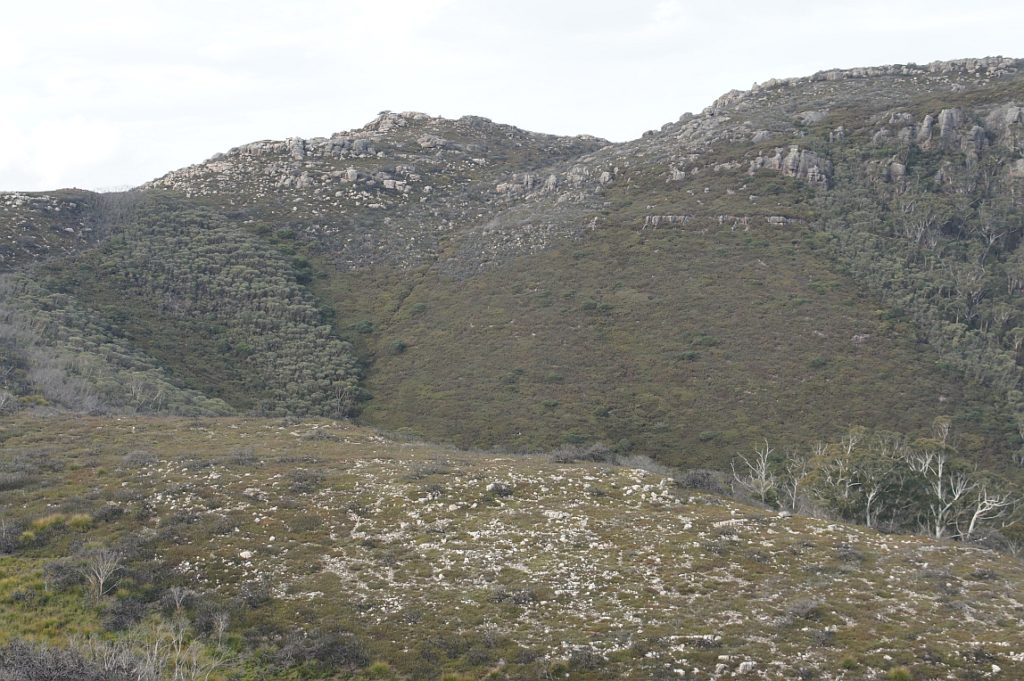 In the picture we stand in the back country near Kydra on the crest of the Great Divide from which the ocean can be seen near Bermagui. Tall endemic Wadbilliga ash (Eucalyptus paliformis) grow to the right, downslope, and further down, Jilliga ash (Eucalyptus stenostoma), while in the dense strips to the left there are the mallee Eucalyptus kybeanensis and Acacia kybeanensis. Some other interesting and very rare plants grow in the vicinity, including A. kydrensis, and the woolly-bear wattle, A. lucasii. The first trickle of the Tuross River begins on the slope far left, and nearby there are such gorgeous plants (all pictured) as the startling spiderflower Grevillea irrasa subsp. didymochiton, Styphelia psiloclada and Eucalyptus moorei var. latiuscula, a particular favourite of mine for its starburst-like buds and flowers and pretty form.

Below those awesome slopes in the upper Brogo River valley gorges grow the tall and wonderful silvery Acacia blayana, a species that occurs naturally only in that catchment.

One could write on and on about this part of the landscape and its vast snow heathlands. And of course it has been done already in the Back Country book. On the Brogo wattle at pp 236-7 it says ‘As soon as I had unloaded my pack after the walk into Galoon Creek I set about trying to identify my specimens of the ‘Brogo wattle’. Quite as I had expected, the tree book showed none like it. I leant back against my leaning tree with a smile and considered the foliage. Another secret from the Brogo wilderness, I thought; it still has almighty trees which are unknown to science, not just a wildflower or moss, but an acacia that grows taller than most other species; one that is attractive, distinctive, ornamental. Its bipinnate foliage had retained the silvery-blue gleam, the fronds looked rather like the jacaranda’s. It appeared to grow only between 100 and 700 metres above sea level in a number of generally north-facing gullies within the Brogo catchment, associated with eucalypts and other acacias that are highly specialised or unusual, sometimes in rainforest as well as through the whole gamut of rocky steepness into the high belts of ash. My imagination pictured it being cultivated for its leguminous qualities as much as its beauty, and growing in profusion about all manner of Third World towns and villages as plantations to provide windbreaks and wood. Much later, when I was at the herbarium for identification of the specimens I had collected, I saved the ‘Brogo wattle’ until last. ‘I’ll bet you don’t know this one,’ I said. They examined it with much scratching of the head and quickly confirmed my suspicions.

‘Subsequent researches were to prove it was a new species, with flowers of a deep golden colour, and that it was going to be named Acacia blayana.

‘I believe I could have given them far better names. Acacia literatii appealed to me but the nature of botany permits little frivolity. That does not mean the names cannot be euphonious or even delightful. It would have been my argument, for example, that resulted in the rare and lovely Eucalyptus Deuaensis gaining the common name of Mongamula mallee.’