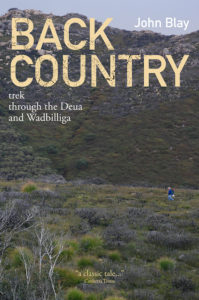 The wilder-ness, not areas designed to deny the old Aboriginal Country, but rather those where it is most evident, without the intrusion of roads and houses and highways and fences. Places owned by nobody, by everybody. The old lands. The wild country, where you experience that sense of the ancient Australia. I needed to open myself to it again. I was being called back…

In 1981 John Blay was awarded the Parks Writers Award. Accompanied only by the unfaithful Zachary B. de Mule he set out on foot walking through the Far South Coast escarpment backcountry of Deua and Wadbilliga National Parks to find unique and rare wildlife, falls, gorges, caves, gold diggings, Aboriginal sites, swamps, mountain heathlands, fabled Yowie haunts and bush characters galore. Then came the extreme ruggedness of the Brogo headwaters, one of the few untouched catchments on the east coast of Australia. His aim was simply to walk through each park over an extended period and chronicle what it means to be thrown up against the rugged back country, a great wilderness in every sense.

By the author of On Track: searching out the Bundian Way, this much-revised and updated tale is the first part of a south east forests trilogy that reflects evolving understandings and the changes, such as new scientific names, while emphasising the deeper, timeless back country values. His ongoing pilgrimage through the mysteries of the region’s natural history has stood the test of time.

This is the author site. All copies purchased will be signed by the author, or if you’d like a particular endorsement, please request this at the time of purchase in the ‘instructions from buyer’.

…the prose is as tough as the salt pork that the likes of Eyre and John McDouall Stuart used to gnaw at when they were lost… his encounters with bush people and reflections on the infinite— all contribute to a bracing read… It’s a rewarding experience to follow
— Derek Whitelock, Sydney Morning Herald

…the text is peppered with sensitive observations on the country through which he travels and the people he meets. Most of the writing is brisk and good humoured, including lively episodes which display the skill of a practiced playwright… It kept taking me back in fond imaginative memory to Ovid and the child in David Malouf’s An Imaginary Life.
— Ray Ericksen, Habitat

…more in the tradition of English narratives of long walks in strange and lonely places. Blay is a professional writer and it shows in his robust text which attains a plateau of excellence not often reached by writers about the bush… a classic tale
— Graeme Barrow, The Canberra Times

The Parks Writers Award confirmed a life-long investigation of south-eastern Australia’s forests for John Blay. Accompanied only by a fickle Zachary B. de Mule he set out on foot through the challenging escarpment country of Deua and Wadbilliga National Parks, walking all the way from Araluen to Bemboka. His researches and travels in the region have continued over the years, resulting in Back Country Trek through the Deua and Wadbilliga, an updated exploration of the most extreme, rugged parts of the south-eastern ranges.

His back country was to be found all around those forbidding mountains you see as you look inland from the far south coast of New South Wales. It’s crazy country for the most part, tucked between the Monaro and the coast, full of sudden shifts and faults and gorges and valleys too rugged for roads and forestry operations, and it had been tantalising him for years. On setting out into the upper Deua he found it was like going back in time. The characters he met along the way reinforced this impression. But most especially it was the stories he was told that brought the region and its wilderness to life for him. As time passed his growing familiarity with the flora and fauna also brought all manner of insights. The strange, radical landforms brought unusual plants. One of them he discovered was a wattle growing to over thirty metres that was named Acacia blayana in his honour.

Despite the hardships and difficulty he faced, the book paints an extraordinary journey through place and time complete with wildlife, imagination and wit.

After very many years the back country is still there, to all intents and purposes the same. But the world has changed radically since the days when it was made national park in 1979. In the beginning Blay’s aim was simply to put himself in the new Deua and Wadbilliga parks for an extended period and discover what it means to be thrown up against such rugged wilderness. But it has called him back many times since he began his long walk.

In fact hardly a day has gone past in the intervening years when, as he says, he has not had cause to reflect on his times there and how they changed him and his view of life. The time has come now for him to revisit the back country and the book that was published in 1987. Although things are similar in all practical respects, the same territory and events from day to day, so many changes have come about since 1987 that when he set about reworking the text to bring it up to date, particularly in respect to the many changed scientific names of things, he found numerous processes that began then have only crystallised in more recent years. Time scales work differently in the back country.

By the author of On Track: searching out the Bundian Way, this is the first part of a south east forests trilogy that brings to light the deeper, timeless back country values. His ongoing pilgrimage through the mysteries of the region’s natural history has stood the test of time.

Following its first publication in 1987, now long out of print, this much revised edition of Back Country has been brought up to date with additional information, including preface, illustrations, afterword and index. On the continuing journey of discovery it sits next to On Track.

What others are saying:
In from the wilds

Back Country comes to Sydney and Gleebooks on Thurs 16th Feb for a celebration of the book with Bob Carr doing the honors in conversation with John Blay.

No doubt, all the wit and wisdom a mule could have hoped for…