The Bundian Way is a shared history pathway between Targangal (Kosciuszko) and Bilgalera (Fisheries Beach) that connects the highest part of the Australian continent and the coast. On its way to the coast the Bundian Way crosses the Snowy River and passes through some of the wildest, most rugged and yet beautiful country in Australia. In many parts the influence of the old land management is still obvious in its Aboriginal landscapes.

Over a distance of 365km it follows an ancient Aboriginal walking route from the high country to the coast, by way of the easiest path from the Monaro to the coastal plains. Its recognition is inspired by G.A. Robinson’s story of Al.mil.gong, who walked all the way from Omeo to present his new corroboree to his kin at Bilgalera on 14th August, 1844.

The Bundian Way is a pathway that is possibly more than 40,000 years old, certainly far older than the Pyramids or the Silk Road. In December 2012 it was entered on the NSW State Heritage Register, both for its Aboriginal and European and shared heritage values.

When the European pioneers arrived in the SE region of Australia they found the mountainous country a barrier to settlement. Produce of the Monaro, for example, was too difficult to get to market without access to the port in Eden. When travelling and sending freight by sea was the best option, the nearest harbour in Eden could not service the settlers.

The old Aboriginal clans of the region came to the rescue and showed the settlers the way to go. They could follow the pathways that had been used for thousands of years. These became the first roads. Not only did the Aboriginal people show the settlers how best to get between the coast and the Monaro, they also showed them how to get to Gippsland which was unsettled at the time.

The Bundian Way is a descriptive name as it goes by way of the Bundian Pass, which was the easiest walking route from the tablelands to the coastal plains. It skirts Bondi Creek, the old Bondi Station and the district referred to by names spelt in various ways, such as Bundyang, Boondyang, Boondi and Bondia in early accounts. W.B. Clarke described it during his explorations of the Monaro in 1851. G.A. Robinson in his journeys of 1844 refers to the grassy hills or downs of the south-eastern Monaro and says, in his very own phonetic way, ‘the tribe is called Pundeang mittong, Bungunggarley alias John Gow is a native of this place at Pundang.’ Oswald Brierly drew Mur-rowra Esquire, a resident of ‘Bundyang’, in 1843. 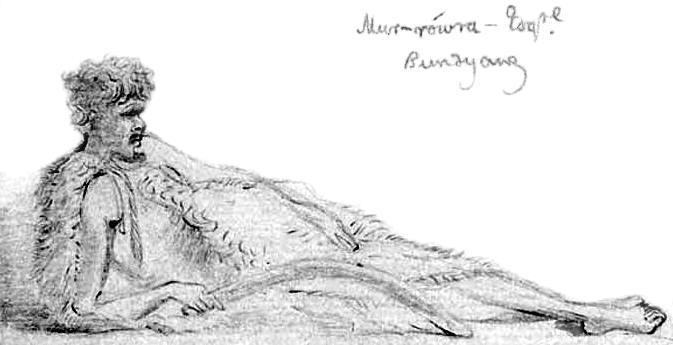 Its route mostly follows wild country and local roads and tracks. One spur continues on to Omeo and Gippsland or to the western plains via the Omeo gap. Much of the landscape is extremely rugged and it includes the much-mythologised Man from the Snowy River country. Its very wildness made the pathways all the more important before any roads were developed. It is well recorded how Aborigines showed the way first, and subsequent use resulted in exploration and development of places like Gippsland in the earliest days by Macalister, McMillan, highland Scots shepherds, and the horsemen and cattlemen who followed; some who noted and followed the pathways included Lhotsky, Brodribb, Lingard, Ryrie, Lambie, A.W. Howitt, W.B. Clarke, von Mueller, Oswald Brierly, G.A. Robinson and others.

As an ancient pathway it was one of the remarkable trade and cultural routes of Australia, not only connecting the moth sites of the high country with the whale places on the coast but also Gippslamd and the western districts of Victoria and beyond via the Omeo Gap. It predated the Silk Road, the Roman roads and other great roads of world antiquity. In its practical role it connected Aboriginal people and their kinship and landscapes, their special places and ceremonies.

But today it has a symbolic role that demonstrates the Aboriginal people’s deep connections with their much-varied environment and how, in an ever-changing world, some things remain. You can still walk all the way along it, mostly through wild country or minor country roads, from the highest part of the continent to the coast. Many traces still remain in the present day.

The Bundian Way runs for some 390 kilometres between the Snowies and Twofold Bay. It will pass by special information/education places where the countryside’s Aboriginal characteristics will be recognised.

The Bundian Way passes through Delegate and the village of Towamba, finishing near Boydtown on Twofold Bay. Opening of the route should have considerable cultural and tourism advantages for the region including places like Thredbo, Towamba and Boydtown but also in the grater region from Canberra and its international airport. It is not intended that the corridor should adversely impact on development or the economy. Forestry and farming would continue as ever. The corridor would serve to focus information about the Aboriginal landscape.

The proposal has nothing to do with native title. It is not a claim for land or ownership, but rather that some Aboriginal cultural heritage values in the historic landscape should be acknowledged. These are symbolised by the old pathways. A major survey to identify Aboriginal values and landscapes commenced in August 2010. The project is being conducted by Eden Local Aboriginal Land Council in collaboration with land management agencies of the region.

Although the basis for the proposal is largely historic and symbolic, the Bundian way is part of a network of Aboriginal path ways in Yuin, Ngarigo, Jaitmathang and Bidawal country. These connected the people and their ceremonies, as well as sacred places, and trade routes across the continent, more particularly they were used to travel to and from places where special events took place, such as: