Uncle Bill Campbell and the Blue Boat appeared in Sculpture on the Edge at Bermagui in March 2017. The installation featured the voice of Uncle Bill Campbell, an Aboriginal fish spotter renowned throughout the region, recorded in 1975 by John Blay. Billy could see fish in the water where most could only see reflections on the surface, and talked about the skills of Aboriginal people in fishing. The sculpture appeared on the point from which he commonly looked out for the big travelling shoals of mullet or salmon 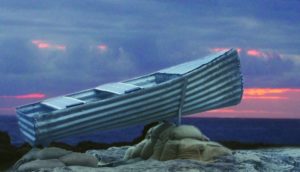 After showing at Bondi’s Sculpture by the Sea and Sculpture Bermagui a new sculptural installation attracted much interest.

Les St Hill and the Tin Canoe included the oral history of a WW1 veteran recorded at Bermagui in 1975.  At the Lake Light Sculpture, Jindabyne, it won the $10,000 Major Prize in Easter 2018.

The judges said: “It was a unanimous decision by the judges, as it extended the definition of what sculpture can be and might be. We loved its animation of space, the way it captured interest and invited pause, and loved the way it connected with the Snowy Mountains and the whole idea of storytelling and oral histories.

“It is a piece that could sit anywhere in the world, very professional and well resolved work, and a fabulous piece of public art – with a beautiful use of sound, and a beautiful use of the solar energy around to push that forward. We did not expect to see this here. 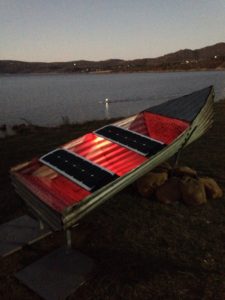 “As the judges approached the “Tin Canoe” at the end of the path, they noticed a man sitting on a bench quietly listening to the stories emitting from the exhibit, and this reinforced their unanimous decision on the winning entry.”

After the Bondi event the sound of the tin canoe was augmented and more voice material added so that Les St Hill tells of his childhood days round Baragoot before 1900, the animals and trees and fishing as well as communications and the old days in Bermagui, as well as his time in Palestine with the Light Horse during WW1. The environmental sounds include the curlew, often described as the loneliest of bird calls. Although it is now extinct in the region, it is the sound missed most of all by old-timers such as Les.

Les tells of his childhood during the 1890s before the days of motor vehicles and telephones and the richness of the wildlife.

The installation is a handmade tin canoe outfitted with solar and a sound system to reproduce the voice of Les St Hill through speakers in the near perfect sound-shell. The recordings were made by John Blay during an extensive oral history project in 1975 and arranged by Jane Ulman as a soundscape to incorporate the environmental sounds.

The tin canoe was made in Eden from old corrugated iron with much assistance from friends and neighbours following models he used during his childhood.

Tin canoes were a traditional pastime for youth before fibreglass and plastics came on the market. They were extremely dangerous but at the time youth lived with a greater level of risk than nowadays and of necessity had to find ways to survive. Each canoe was a personal design. You simply found old sheets of corrugated iron, strapped them together with wire or boards and nails, and filled any holes with tar that had been gouged out of the roads during hot weather.

‘When I first started chatting with Les in the mid-seventies he would talk about the canoes he used to make as a boy and we’d swap stories about design and adventures. It was a delight to see a photo of the tin canoe he’d made for his son and then adapted for his grandchildren to use on Baragoot Lake near Bermagui.’

‘During the recordings he talked about his childhood days round Baragoot, how he was apprenticed to Sam Sinclair, the village blacksmith, and the old days in Bermagui.

‘During WW1 he served with the Light Horse in Palestine where he was wounded in the hip during the closing stages of the battle for Rafa, a small but strategic coastal town on the Egypt/Palestine border. In January 1917, he was hospitalised in Cairo. He also survived a serious bout of malaria contracted later in 1918 that would keep recurring for decades.

‘He told me, most importantly to him, how things were during the days before 1900 when the times were really hard. Depressions led up to the great Federation Drought.

In fact, the Bermagui Nature Reserve was established at the back of Baragoot because of the number of small macropods, especially long-nosed potoroos, which he knew by the old local name of kangaroo-rat. He also talked about the quality of trees in the coastal forests, the size and girth of them.

In his own way Les preferred the older, richer Australia and its biodiversity, where members of the local community would cooperate and help each other out wherever possible to cope with the hard times. 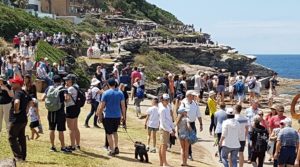