The Bundian Way has a remarkable shared history. Shared use of pathways resulted in exploration and development of the south east coast between Bega and Mallacoota, as well as on the Monaro and into Gippsland. The old Aboriginal people showed the European ‘explorers’ the pathways and permitted use of the country in the earliest days by highland Scots shepherds, and the horsemen and cattlemen who followed.

In the first place it was Aboriginal care of their country that resulted in the landscapes that greeted the first European settlers. The scientists soon followed, men like von Mueller and Howitt and W.B. Clarke, in a tradition that has continued to the present day. Their collective accounts and researches give a unique picture of what has remained and what has changed since first European sorties into the area and the impacts on a dramatic range of vegetation formations and classes. Relations were not always cordial.

The Way passes through many Aboriginal landscapes and demonstrates some of the variety and antiquity of their land management practises. It is possible eucalyptus speciesisation led to its domination of the landscape as a consequence of firestick use from about 40 to 50,000 years ago. Many scientists say the series of eucalypts (and the communities they dominate) between the tree line and the sea have universal significance and deserve the highest heritage recognition. Further research along the way should help us to better understand how traditional Aboriginal land management shaped the complexity of the landscape and its vegetation patterns, and may well assist in developing new modern approaches to land management. Certainly, enhanced understanding of the Aboriginal landscape will bring greater respect for country.

Heritage award for Bundian Way
The Bundian Way Management Advisory Committee has received NSW’s highest heritage award in recognition of the heavy workloads the project has demanded of its volunteer workforce. At the presentation of the 2012 NSW Government Heritage Volunteer Award the Minister for Heritage, Robyn Parker, said:

The Bundian Way Advisory Committee has been instrumental in assisting the Eden Local Aboriginal Land Council and other stakeholders in delivering the Bundian Way Project. Their work acknowledges the ancient pathway made by local Aboriginal peoples from the Snowy Mountains to the sea, which served as a trading route and important cultural network. The Bundian Way Project seeks to provide unique heritage experiences along the pathway, delivered via ‘hubs’ including an Art Gallery and example campsites. The project features both Aboriginal and non-Aboriginal elements that celebrate the pathway as part of our shared heritage. 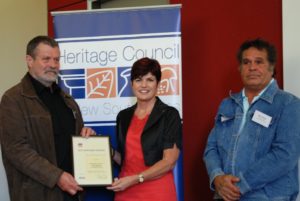 BJ Cruse, Chair of Eden Local Aboriginal Land Council, talked about the amount of work done by the committee at the presentation:

We’ve been working on this for over ten years now. It has all been necessary towards getting a good outcome in heritage terms,

The recognition is great for the Aboriginal people. The committee includes the land management agencies of the region such as National Parks, State Forests, Catchment Management Authority, Lands Department, Bombala Council, Bega Valley Shire Council, Delegate Progress Association and the Education Department. To get this far individuals from these organisations have made contributions far above the call of duty. They all deserve congratulations as well.

Chair of the committee, John Blay, noted that there is still an enormous amount of work to be done before the Bundian Way can be officially opened as a walking route. “Then, we are likely to see the new jobs begin to flow.”